2018 was a year of growth and putting down roots for our family. It’s been a year of settling in- of house projects and building relationships and establishing the rhythms and routines of our life in California.

Early in the new year, John wrapped up training in the KC-10, having enjoyed the challenge of learning a new plane and a completely different mission. During the relatively slow pace of training (i.e., getting to be home every night for a change!), we were able to host a few visitors and take time to explore the greater local area. We’ve wandered farmers markets and busy San Francisco wharfs, bundled up for chilly Pacific beach days, hiked the hills and trails in our town, snuck in some skiing at Lake Tahoe and introduced our children to the wonders of the Sequoias and Yosemite.

Most days, however, we’re close to home. We planted a garden. We have a few backyard chickens. We put up a little playhouse and try to take regular walks to the park in our neighborhood. We’re enormously grateful for a solid church– a community of believers that has been such a source of encouragement, growth, and support over the last year. We’re both involved in the music ministry there and we’ve been able to plug into a few different Bible studies. So much of military life can feel temporary and transient, as we know we’ll only ever be in a given place for two or three years at most. But it’s so important and so worth it to be grounded in this way, to allow ourselves to sink our roots and grow, even if the season is short.

In June, we were able to join the Langley family for one last vacation at the shore house in Ocean City, New Jersey. Building on nearly forty years of family history in that old house, it was a joy and privilege to create new memories there with our own children. There was no shortage of time on the beach, of walks on the boardwalk, of hot, fresh cinnamon donuts, of meals shared on the screened-in porch, of late nights enjoying the company of family. It was surreal and wonderful and bittersweet to have a house so full! 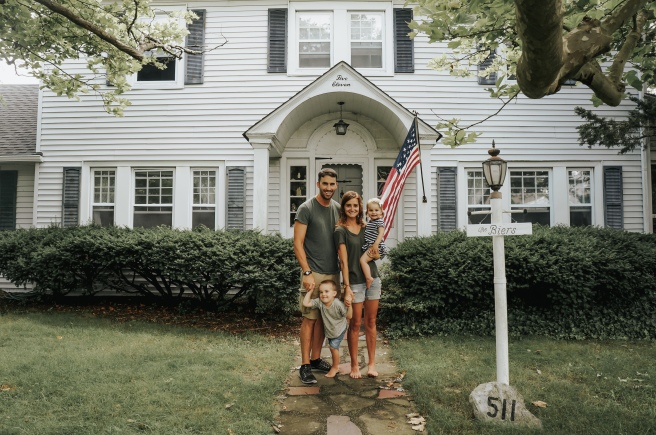 Shortly after we returned from the shore, we got our first taste of deployed life when John headed to the Middle East for two months. He’d previously flown a much smaller aircraft that didn’t serve a direct combat role. Now, the whole reason for all the training, all the preparation, all the equipment, is this: put more gas in the sky to “fuel the fight.” Fighters facing down their Russian counterparts, ground attack aircraft providing top cover for convoys, bombers striking targets, special operations aircraft moving troops in or out, cargo aircraft resupplying them, electronic warfare or airborne command and control – none of these could do their mission without the aerial refueling provided by the tankers.

We realized that for the deployer, other than missing your family, life isn’t so bad – all your needs are met, you get paid more, you have plenty of time for exercise or leisure, and most of the office work is stripped away, leaving only the flying – real, mission-oriented, combat flying. Unfortunately, it’s the families left at home who bear the real burden. Whether sick kids or pets, vehicle breakdowns, home maintenance, medical appointments, evacuating for encroaching wildfires or just breathing their smoke for weeks on end, it all still has to be dealt with, minus a key player. Challenges like these make us all the more thankful for friends and neighbors who generously lend a hand, parents who can take the time to visit, and the internet which allows us to stay connected so much more easily than military families of past generations. We’re also thankful that we haven’t had to do this yet in John’s career – we know many families who have spent literally years apart due to the pace of deployments. Please pray for them, for us, and for our nation as we collectively decide what courses of action to pursue around the world. Unfortunately, the day after John returned from this deployment, we found out he’d be heading out again in two months, this time through the holidays. Having gone the first time as a copilot, this time around he’d be the aircraft commander – a role which, for this particular mission, brings a somewhat heavier sense of responsibility than he’s had in previous aircraft. 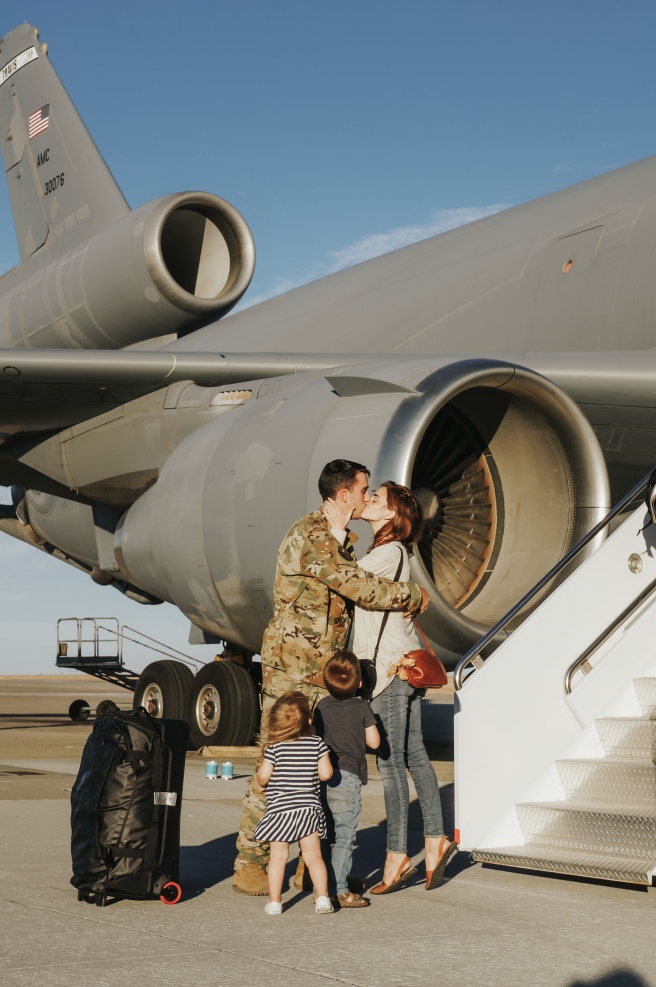 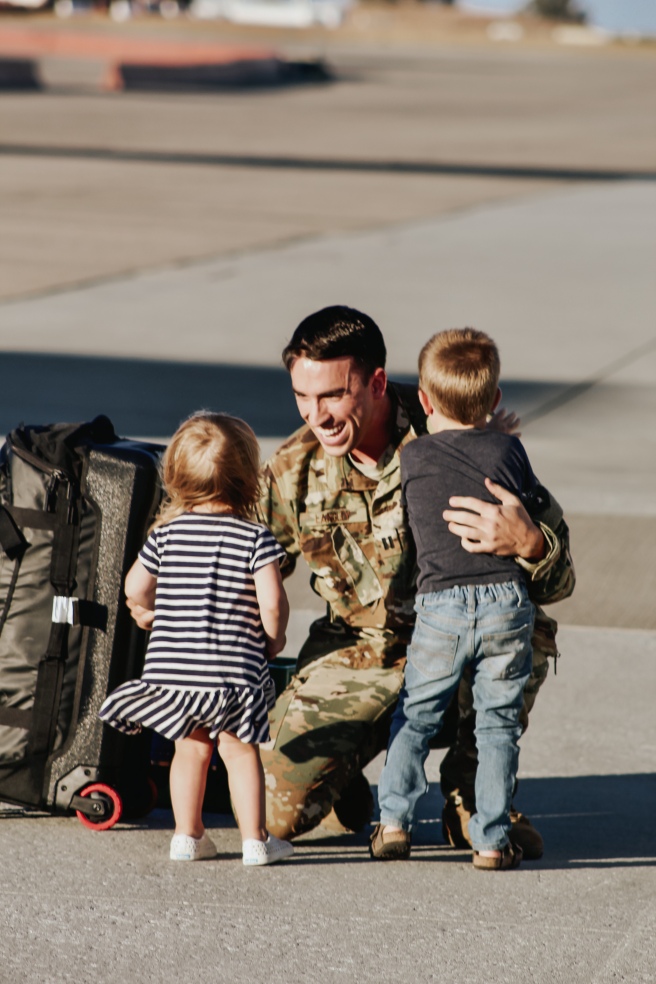 Daniel turned four this summer- an occasion he’d been looking forward to for the better part of the last year. We had a simple celebration at home with dinosaurs and donuts and lots of balloons at home, with plenty of photos for daddy in the desert. He’s a very thoughtful, detail-oriented kid with a never ending list of questions. Lately, he spends a lot of time constructing elaborate LEGO creations and collecting all sorts of treasures outside.

Audrey has grown from a babbling baby into a curious, articulate little girl who celebrated her second birthday this summer. She’s very independent and determined. “I can do it MYSELF!” she declares about most everything. She loves yellow, adores dogs and makes up a lot of songs these days.

We’re delighted to welcome a third little Langley to our family this March! Pregnancy has been a little more wearing this time around with two children underfoot and John mostly away, but also strangely fast – we can’t believe how quickly this baby will be here!

The seven weeks John was home this fall between deployments were fast and full of good things! We spent a few days of rest and recovery in Oxnard, California and drove through Big Sur– it’s as beautiful as ever. We visited old friends in San Diego. Kirsten got away for a weekend to visit her best friend Rachel in Denver. We snuck in a couple dates, picked pomegranates, Daniel and Audrey dressed up as llamas for Halloween, and we began meeting with a couple other families for a weeknight small group. Just before Thanksgiving, John left on his second deployment. We’re grateful for a couple weeks spent in Illinois/Wisconsin with family to break up the time for Kirsten and the kids and look forward to a mini postponed Christmas in the new year.

We’re anticipating a year of big change ahead, clinging to this promise in Isaiah 26:3, “You keep him in perfect peace whose mind is stayed on you, because he trusts in you.”

This morning's work. #rainbowhunt
Golden hour.
Grateful we can still get outside.
Never a better time to make your coffee local if you can. I made a quick stop at @acmecoffeeroasting this morning after braving Costco and I'm so glad places like this exist. Let's keep it that way.
Our life has recently changed in what feels like a million little ways and also not at all. Praise God, we moved and got settled before the COVID-19 closures and chaos ensued. We could have been in limbo for months. We might not have had a home. We're not facing family separation or unemployment or cancelled plans. It's just a lot cozier than we expected. John's next three months of classes will take place right here in our tiny apartment, not the Naval Postgraduate School. So will homeschooling and meals and chores and parenting as usual. We're trying to be extra gracious in this new, strange season of figuring out new habits and rhythms for living and working here together. Just like everyone else. And we'll make it work. On the upside, we didn't meet anyone yet to be quarantined from. And there's still an ocean two minutes out our front door.
"You keep him in perfect peace whose mind is stayed on you, because he trusts in you." Isaiah 26:3
Endlessly interesting.
Fresh air and tide pools.